A lot has changed since 1946, but one thing that hasn’t is City National Bank of Florida place at the center of our community, where our tradition of service these last 75 years is providing a foundation for a future full of possibilities for all Florida.

City National Bank of Florida has the tools and expertise to help you shape a brighter future. Find out how we can work together to achieve your financial goals.

Learn how we can help you grow

Leonard Abess Sr., an accountant, and Baron de Hirsch Meyer, an attorney, who were already business partners through earlier experiences as bankers, founded North Shore Bank on 71st Street in Miami Beach. This institution, with $500,000 of capital, represented one of the first commercial banks in Greater Miami, which was riding the wave of a prosperous post-World War II boom. For these two friends, known in some quarters as “the Gold Dust Twins” for their business acumen and successes, this event marked another milestone in their business relationship. A driving force behind the bank’s founding was the pair’s desire to assist Jewish entrepreneurs who often faced discrimination when they sought loans from banks in the area. 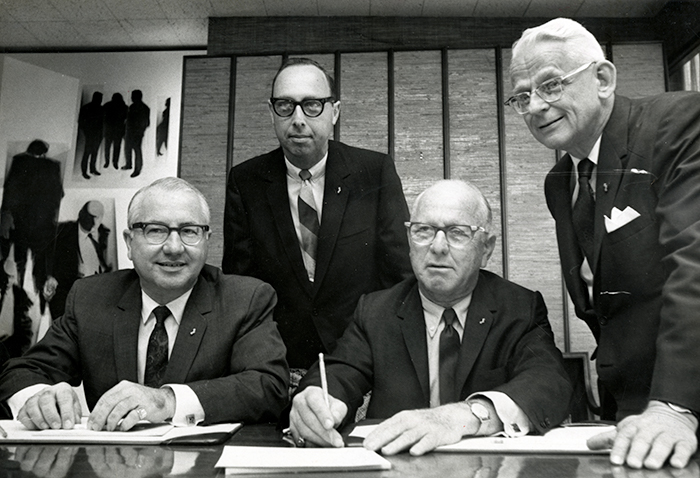 These same investors purchased the Industrial Savings Bank (A Morris Plan Bank), which stood on 46 W. Flagler Street, in bustling downtown Miami since 1937. After the purchase, it became known as, and converted to, Industrial National Bank, and was on its way to becoming the largest savings bank in the South. Downtown’s Flagler Street was the most important venue for the area’s booming economy as it was the center for banking, consumer, entertainment, and professionals. 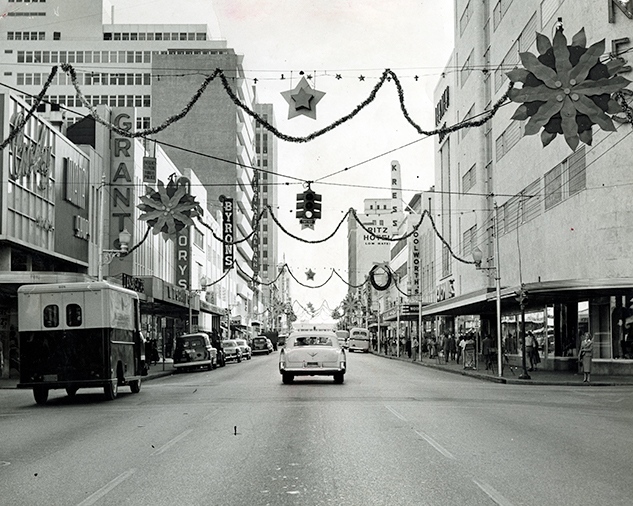 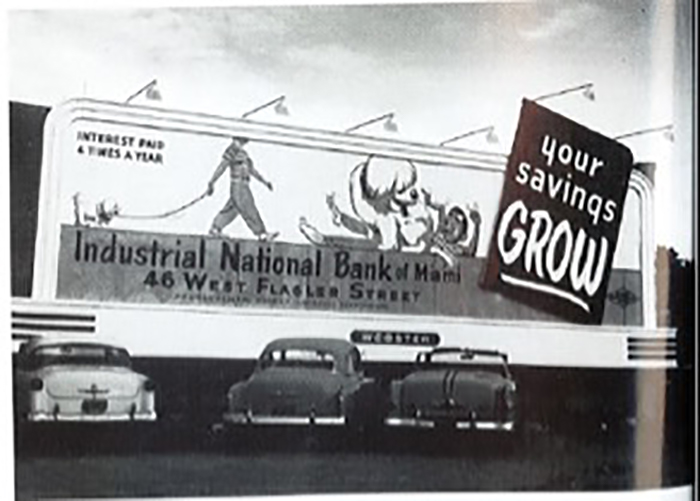 The Industrial Bank of Miami was the lone banking institution in America with two women vice presidents. 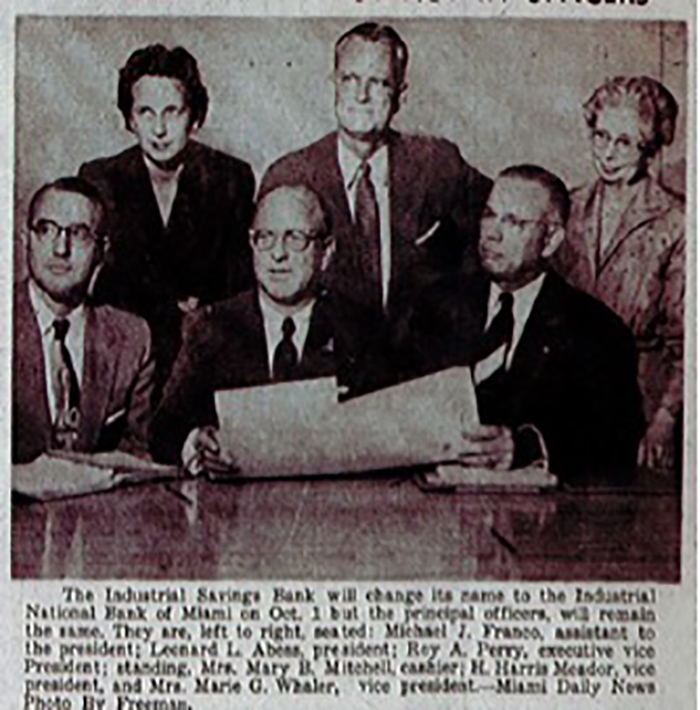 As America’s unabated postwar prosperity entered its second decade, Abess Sr. and de Hirsch Meyer founded City National Bank of Coral Gables. This banking center became the first to use the name City National. In the following years and decades, new banking centers would carry the name while existing banks like North Shore and Industrial National would embrace City National as part of their names.

The institution then called Industrial National Bank moved from 46 West Flagler to the new building at 25 West Flagler, a five-story Miami jewel designed by Modernist architect Edwin T. Reeder. Even before its opening, the state-of-the-art design received accolades in architectural magazines and in the local press.  The structure’s façade includes a gold-tinted anodized aluminum grille that served as a solar screen to absorb heat.  In addition, the building was fully air-conditioned, a rarity at the time. Additional top floors were added to the building in the mid-60s. 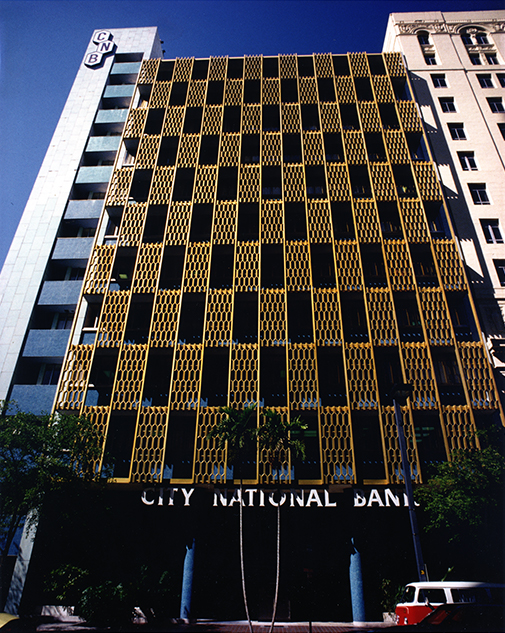 *iPad and iPhone are trademarks of Apple, Inc. registered in the U.S. and other countries. 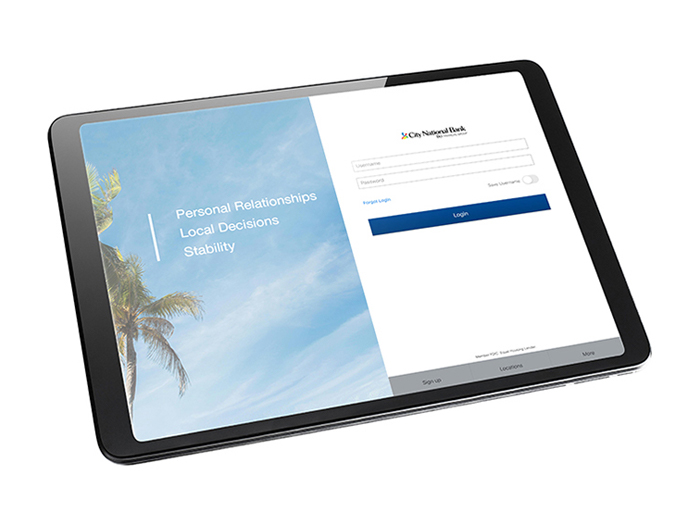 City National Bank of South Dade opened in a Kendall shopping center.  By then, the bedroom community of Kendall, less than two decades removed from its days as horse country and farmland, was booming as Greater Miami’s suburbs welcomed newcomers from older neighborhoods as well as from other parts of the U.S. and abroad. A few years later, the bank moved to its present location at 6975 S.W. 87th Avenue. 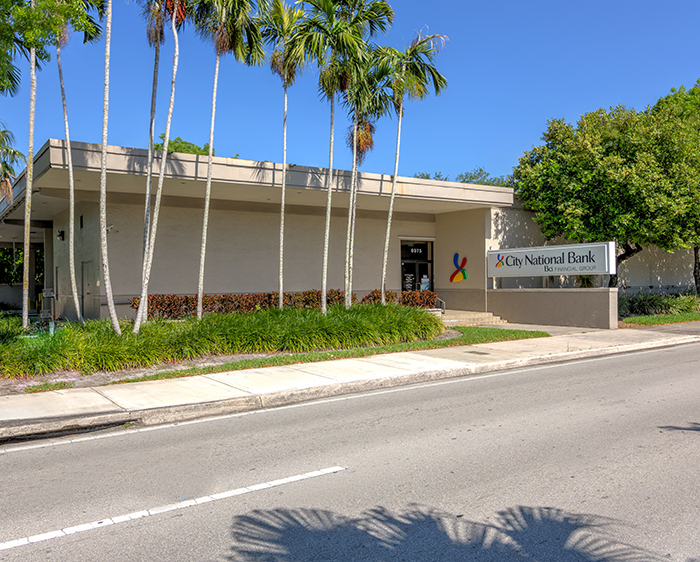 Seven more banking locations were added. They ranged throughout Dade County (Note: The county did not become officially “Miami-Dade County” until the Fall of 1997), whose population reached two million by the mid-1990s. By 1995, City National Bank of Florida was one of the largest family-owned and operated community banks in the U.S. with nine offices in Miami-Dade County and one in Broward. The Main office remained at 25 W. Flagler Street.  A second downtown office opened in the towering One Biscayne building on Biscayne Boulevard, and a third downtown office opened at the Government Center. 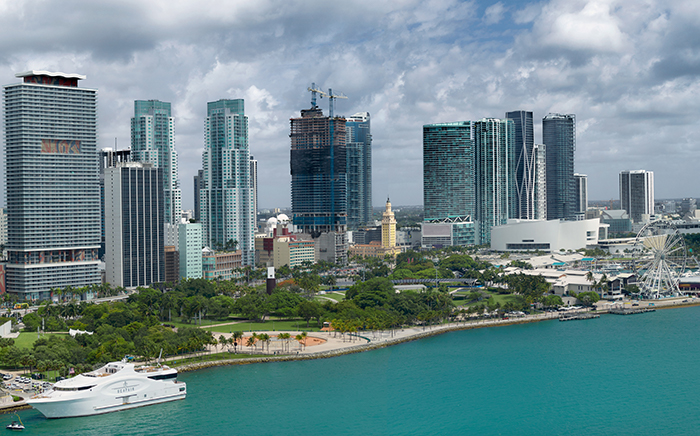 Florida’s banks were permitted to establish branch offices.  City National Bank of Florida was the first banking institution in the state to consolidate its banks into branches.

Leadership is transferred from founder Leonard Abess Sr., to his son. At the age of 35, Leonard L. Abess, Jr. became chairman of the board, CEO and President of City National Bank of Florida.  He was one of the youngest bank chairpersons in the U.S. Under his steerage, the bank’s assets grew from $400 million to $2.75 billion at the time of its sale to Caja Madrid in 2008. 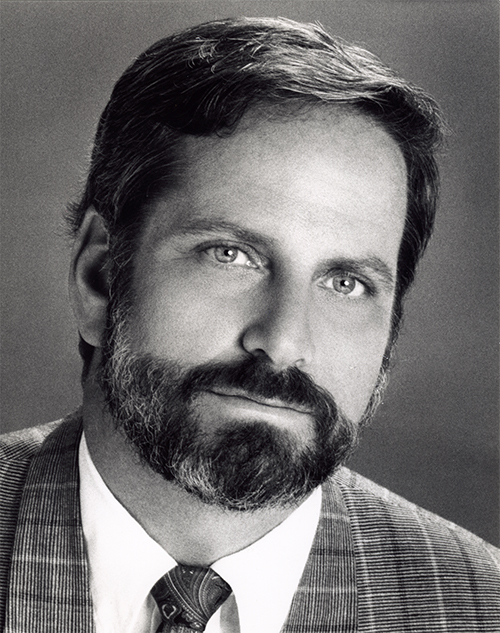 From almost the beginning of their banking careers, Abess and de Hirsch Meyer were deeply involved in improving conditions and lives in their home community. Earlier, both were instrumental in the successes of the Community Chest, the forerunner of today’s United Way of Miami-Dade.  Both were among the founders of Mount Sinai Hospital, whose origins can be traced to the determination by Jewish leaders here and elsewhere to provide a hospital for young Jewish physicians who were often turned away by other health care facilities in their quest for residencies and staff positions. While Abess devoted much of his time and resources to Mount Sinai, de Hirsch Meyer, also a Mount Sinai champion, was especially supportive, in the financial sphere and otherwise, of the Miami Jewish Home and Hospital for the Aged. One of the towers is named for Baron de Meyer, while Leonard Abess, Sr. and his wife Bertha were members of the hospital’s Founders Club and Humanitarians in the Society of Mount Sinai. Later, Leonard L. Abess, Jr. would become a major benefactor of some of Greater Miami’s most important institutions.  He has a rich history with the University of Miami and St. Thomas University.  His wife, Jayne, was chairperson of Goodwill Industries for eight years and had a critical role in saving the organization. 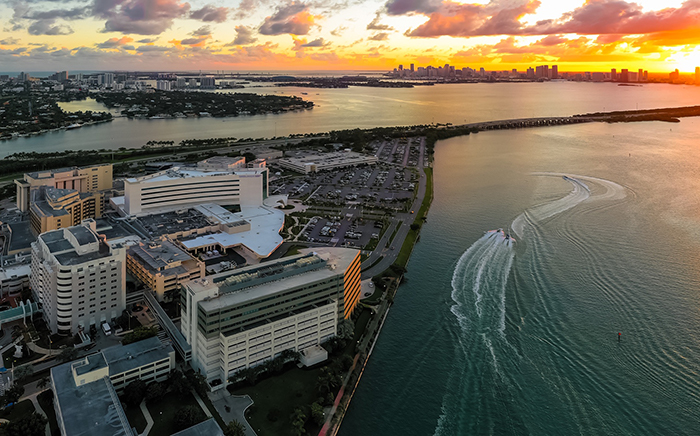 In the mid-1990s, Leonard L. Abess Jr. was the founder and played a major role in the creation of Gwen Cherry Park in Liberty City and was a key supporter of Roots in the City, which involved residents of inner city neighborhoods in the cultivation and harvesting of fruit and vegetable gardens in vacant lots throughout these communities. 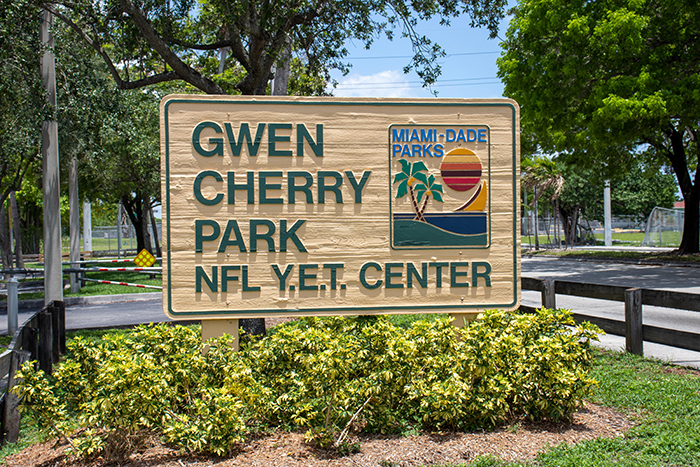 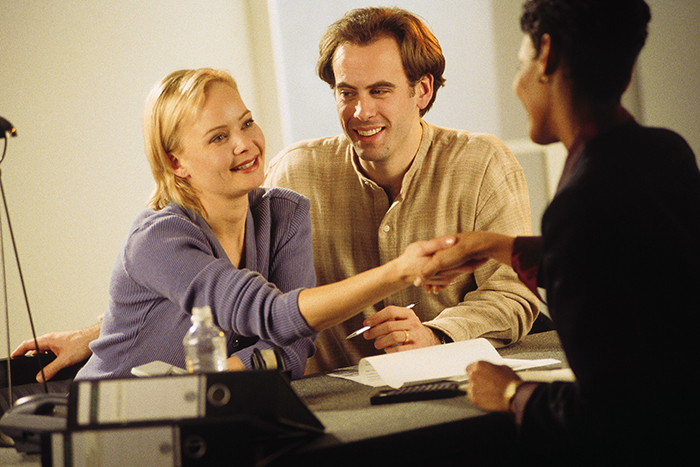 City National Bank of Florida’s assets topped $2.75 billion.  By then, the bank included a central office in downtown Miami and 20 banking centers spread throughout southeast Florida, an Altamonte Springs office in the Orlando area, as well as a banking center in downtown Orlando, which was one of the first green banking centers and was LEED silver certified, a globally recognized symbol of sustainability achievement and leadership, long before almost any other bank. Today, the City National Bank of Florida name proudly sits atop this landmark Orlando building as a symbol of our commitment to Central Florida. 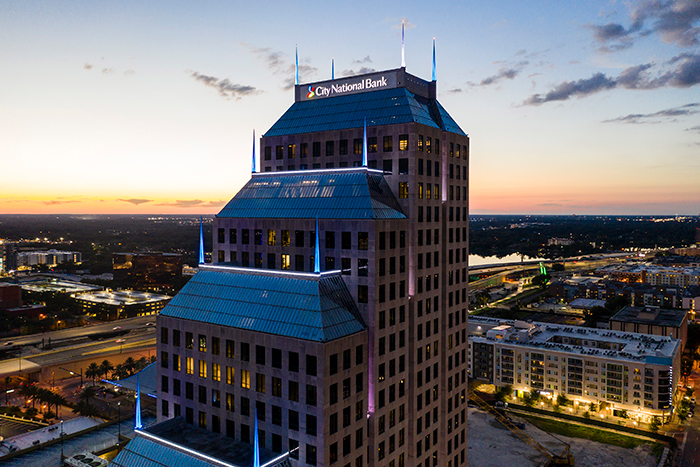 Caja Madrid, a Spanish banking consortium, purchased City National Bank of Florida for $1.28 billion. Soon after the sale, Leonard L. Abess, Jr., its departing chairman, famously gave $60 million of the proceeds to 399 employees who worked for him at the time of the bank’s sale and another 72 who were retirees.  The following year, in his State of the Union address, President Barack Obama recognized Leonard, who was seated next to Michelle Obama in the gallery of the Chamber of the U.S. House of Representatives, for his generosity and kindness as all rose, faced Leonard and “broke out in admiring applause.”   Leonard L. Abess, Jr. explained his benefaction, “I knew some of these people since I was seven years old.  I didn’t feel right getting the money myself.” 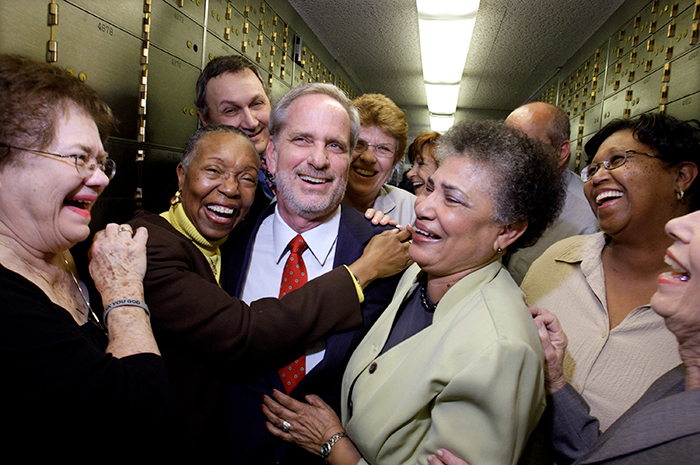 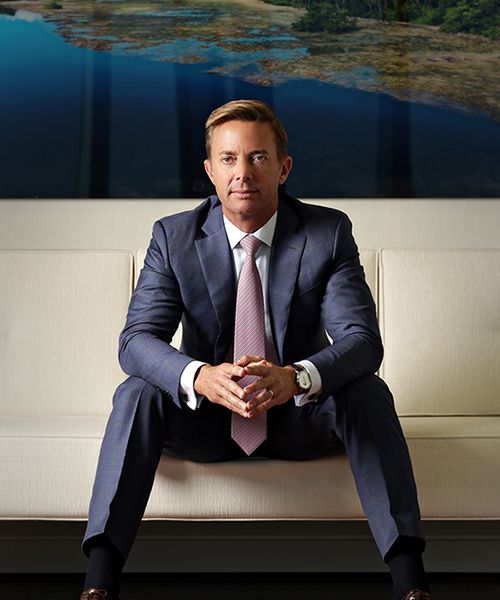 City National Bank of Florida has long prided itself on the strong connection between its employees and the company.  This loyalty by bank personnel to the institution and to its clients is manifest in an almost unheard achievement: In the year 2011, the institution was the only consumer bank in Florida without a customer complaint!

Caja Madrid, which by then was known as Bankia, sold the bank to Banco de Credito e Inversiones (BCI), which is based in Chile.  By then, Florida was the nation’s third largest state with a population that had soared beyond 20 million, and City National Bank of Florida was a valued institution, having been voted Business of the Year by the South Florida Business Journal. 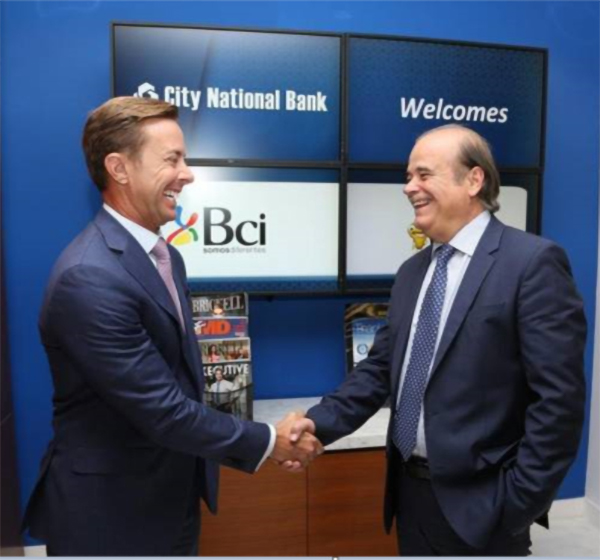 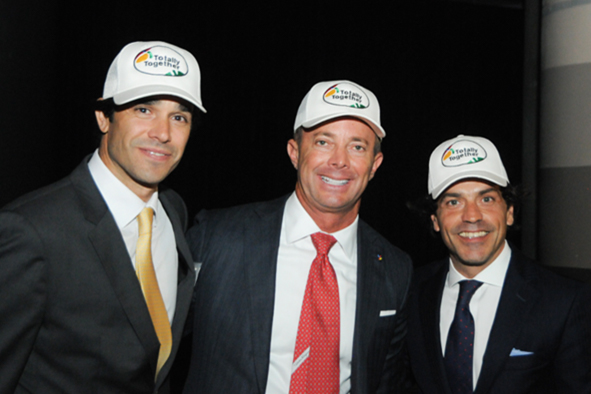 City National Bank of Florida sold its longtime flagship building at 25 W. Flagler and relocated its operations teams to sparkling new offices in the nearby iconic Miami Tower, designed by I.M. Pei. City National Bank of Florida continued to maintain a banking center at 25 W. Flagler Street. The bank also had offices in Miami’s dynamic Brickell Avenue neighborhood and in nearby Coral Gables, giving it a presence in the region’s three largest business and finance hubs. 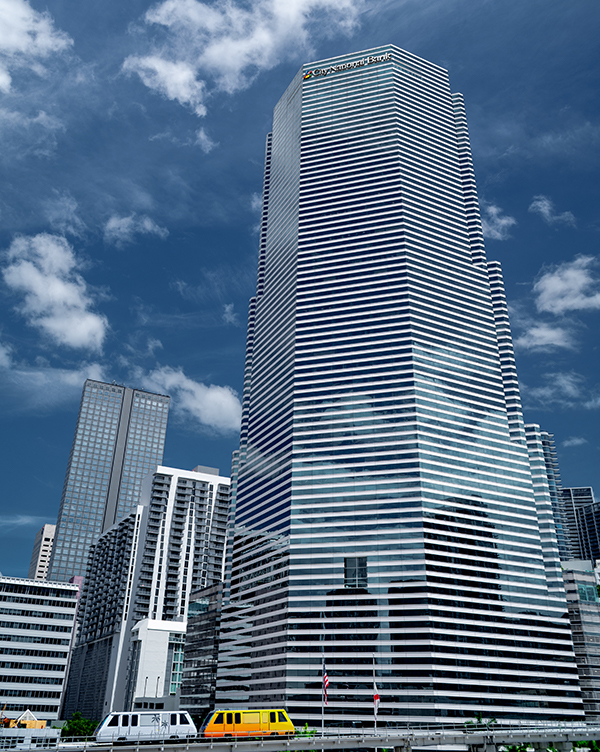 The bank has also helped sustain Florida’s economic well-being in other ways.  During the Small Business Administration’s Paycheck Protection Program (PPP), City National Bank of Florida’s team worked diligently to provide 12,000 loans worth more than  $2.5 billion, thereby helping to preserve 300,000 jobs. The bank was the national leader in the Main Street Lending Program, a Federal Reserve program to provide longer term assistance to businesses during the COVID-19 pandemic.  The bank loaned  more than $2.5 billion to Florida businesses through this program to keep them afloat through this health and financial crisis. City National Bank of Florida was among the country’s most active lenders participating in the Main Street Lending Program, funding approximately 12% of all loans nationwide. 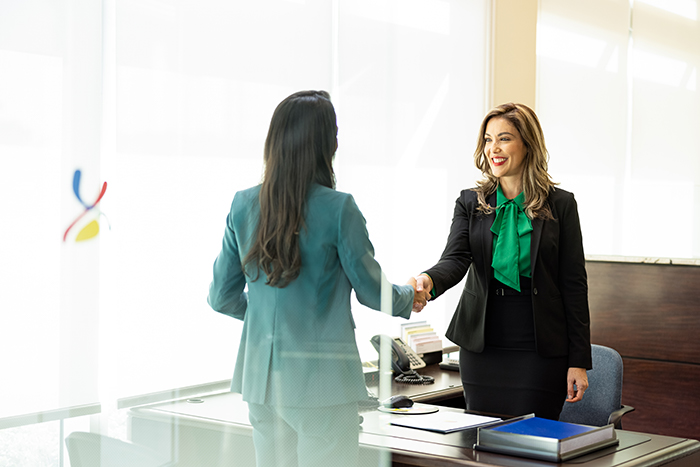 The institution celebrates an important milestone: reaching $20 billion in assets, with more than 900 employees and thirty-one banking locations stretching from Miami-Dade County to Orlando.  This represents a giant leap from the time of its sale to Caja Madrid in 2008 when it had $2.75 billion in assets.  City National Bank of Florida is one of the top 100 banking institutions in the United States, in addition to being one of the largest community banks in the nation. 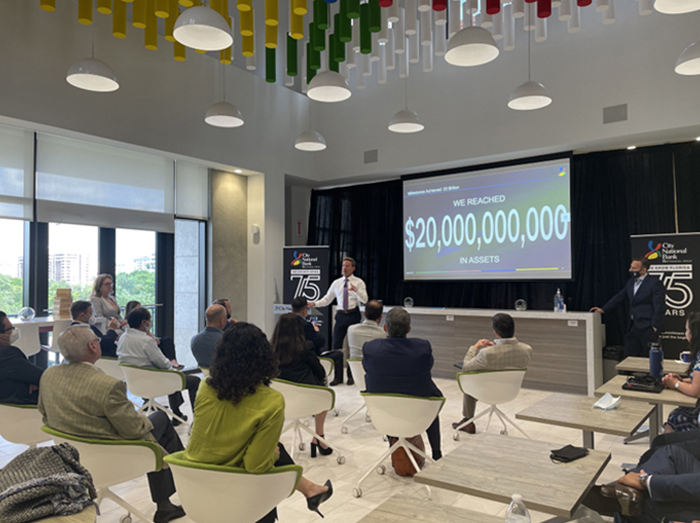 Photo represents the 2021 Employee Town Hall meeting celebrating a big milestone for City National Bank of Florida– reaching over $20 billion in assets. To ensure safety around COVID-19, meeting was held with a limited number of people in-person, while also live-streamed to all CNB locations so that all employees could participate. 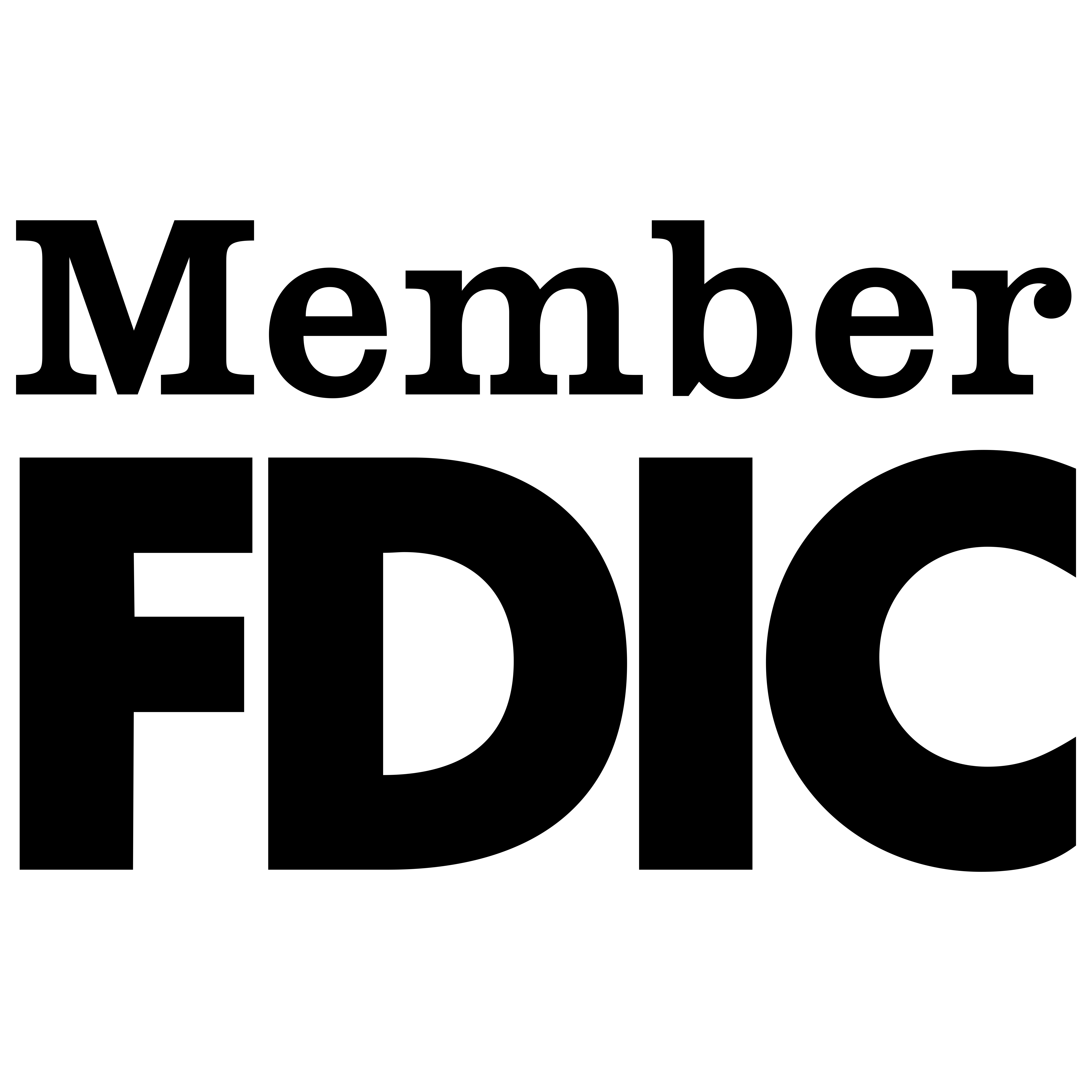 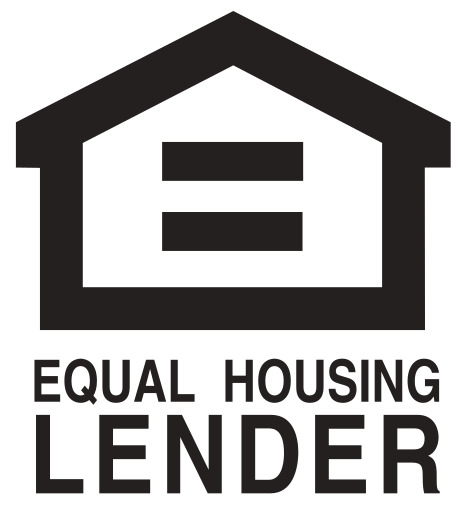